My research is motivated by the surge in social media, cloud computing, and mobile services that is fuelling the unprecedented collection, use and sale of personal consumer information. These opportunities for use of big data afford many benefits to firms, consumers, and government agencies. However individuals can be harmed when their personal information is lost, stolen, or improperly accessed.

In addition to commercial purposes, individual data are used for many kinds of public sector applications such as law enforcement and national security. These surveillance data, whether collected from drones, CCTVs, license plate readers, or other sources, represent an unprecedented opportunity to detect -- and prevent -- malicious activity.

The critical tension, therefore, is in balancing corporate interests, individual privacy rights, law enforcement, and national security. While there are legitimate reasons for limiting the collection, use, or sharing of personal information, excessive restrictions can be inefficient. For example, limiting the types of data that firms can collect may enhance consumer privacy, but may reduce a firm's ability to innovate. Restricted access to medical information may reduce medical fraud, but it may also inhibit important medical research or identify disease outbreaks. Limiting access to location or cloud-based data may hinder the government's ability to investigate serious crimes.

But what is the full landscape of state and federal information laws? How can firms continue to innovate despite increasing data restrictions? Do these laws work as intended, or do they introduce perverse outcomes? What consequences and benefits exist for protecting critical infrastructure, and how can these effects be empirically measured?

How do Information Policies work, and how do they reduce externalities?
Legislators often consider a number of alternative policy interventions to help reduce externalities caused by the unauthorized disclosure or collection of information, such as ex ante safety regulation (mandated standards), information disclosure, and ex post liability. Ex ante regulation is often a heavy-handed prevention mechanism that enforces a minimum standard of care. However, its effectiveness is hampered when the regulated inputs are only loosely correlated with the harmful outputs. Disclosure, on the other hand, can be a corrective mechanism that empowers individuals to avoid potential harms. However, cognitive biases may instead burden individuals, preventing them from acting. Finally, ex post liability allows victims to recover any losses through civil litigation, thereby forcing firms to internalize any harm.

But are these interventions effective? How do they drive firm and consumer behaviors, and how do they affect overall social costs?

These issues present many wonderful opportunities for rigorous empirical and inter-disciplinary research in security and privacy, information policy, applied microeconomics, and law & economics.

Working Papers and Papers in Review

Exploit Prediction Scoring System (EPSS)
I am one of the creators of EPSS, an emerging standard for predicting when software vulnerabilities will be exploited. EPSS is an open, volunteer, and entirely data-driven effort. Our goal is to assist network defenders to better prioritize vulnerability remediation efforts. While other industry standards have been useful for capturing innate characteristics of a vulnerability and provide measures of severity, they are limited in their ability to assess threat. EPSS fills that gap because it uses current threat information from CVE and real-world exploit data. The EPSS model produces a probability score between 0 and 1 (0 and 100%). Visit https://www.first.org/epss/ for more information. 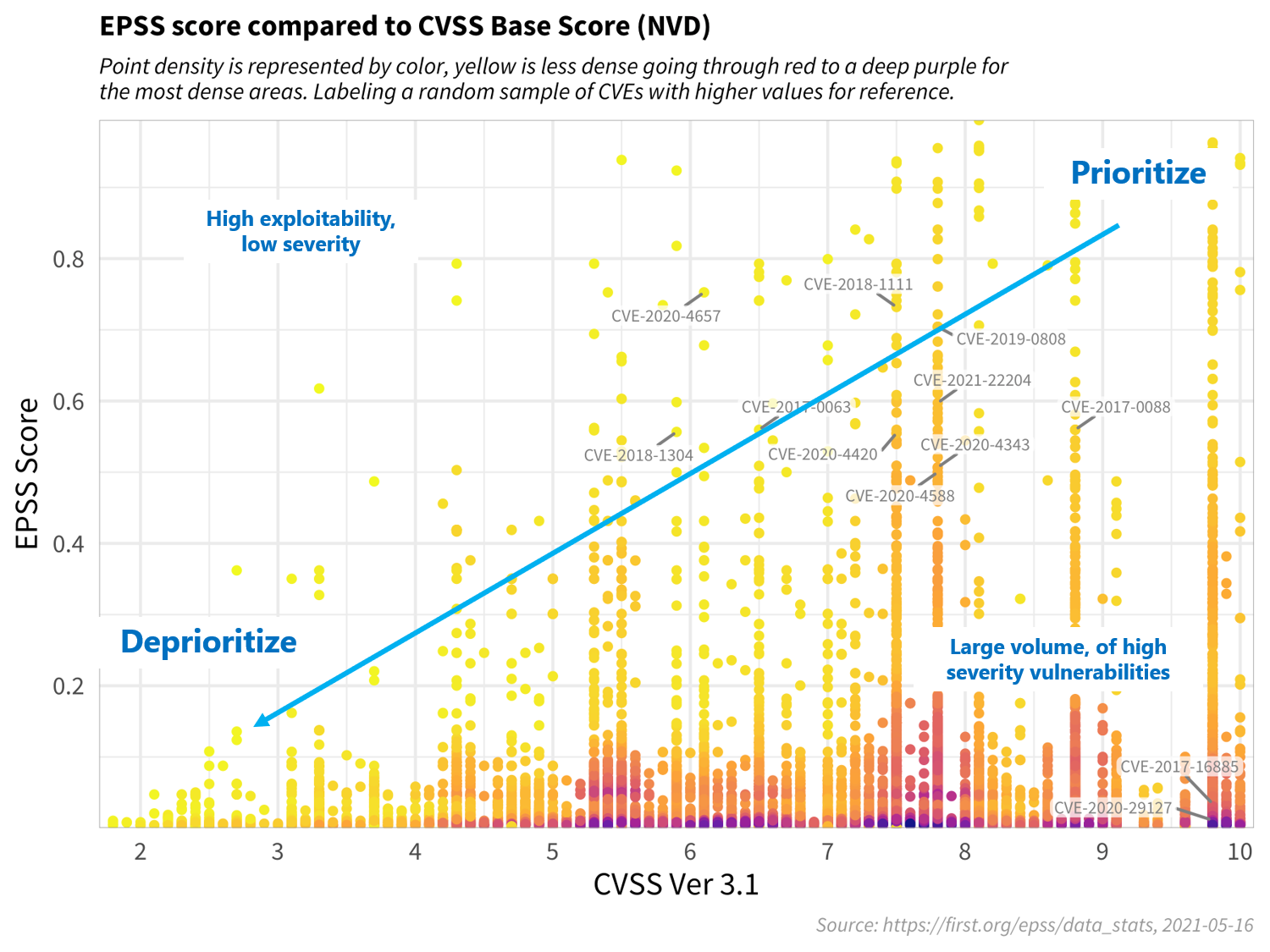 This figure plots CVSS and EPSS scores for a sample of vulnerabilities. First, observe how most vulnerabilities are concentrated near the bottom of the plot, and only a small percent of vulnerabilities have EPSS scores above 50% (0.5). While there is some correlation between EPSS and CVSS scores, overall, this plot provides suggestive evidence that attackers are not only targeting vulnerabilities that produce the greatest impact, or are necessarily easier to exploit (such as for example, an unauthenticated remote code execution). This is an important finding because it refutes a common assumption that attackers are only looking for — and using — the most severe vulnerabilities. And so, how then can a network defender choose among these vulnerabilities when deciding what to patch first? CVSS is a useful tool for capturing the fundamental properties of a vulnerability, but it needs to be used in combination with data-driven threat information, like EPSS, in order to better prioritize vulnerability remediation efforts. 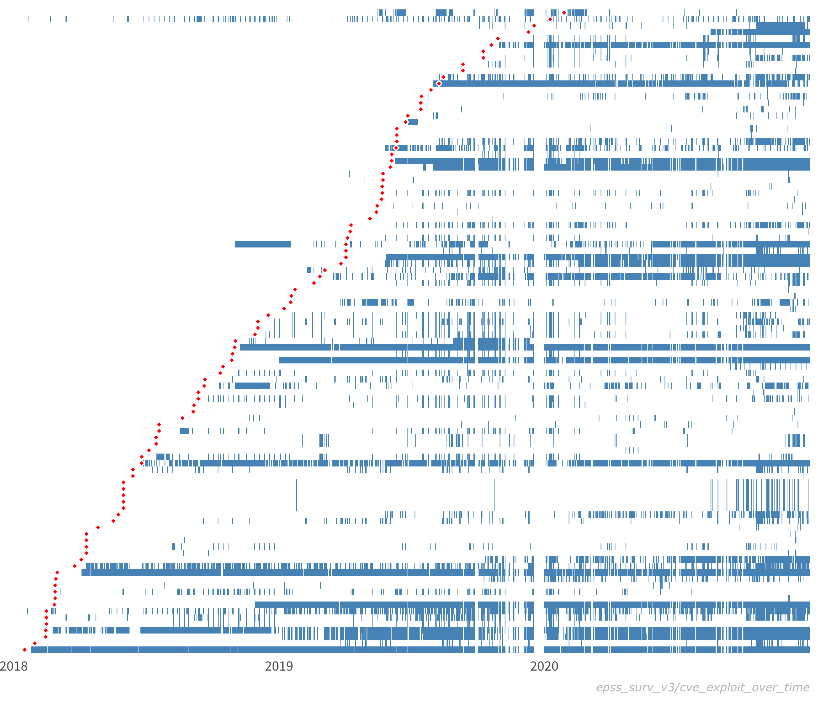 The figure shows actual exploit observations for a sample of vulnerabilities. Each row represents a separate vulnerability (CVE), while each blue line represents an observed exploit. The red dots represent the time of public disclosure of the CVE. (Note that we are not tracking whether these exploits are successful or not.) While it is difficult to draw conclusive insights from these behaviors, we can comment on general characteristics. First, simply viewing these data is interesting because they provide a novel view into real-world exploit behavior. Indeed, it is exceedingly rare to see these kinds of data publicly available, and we are fortunate to be able to share them with you. It is also thought-provoking to examine and consider the different kinds of exploit patterns, such as:

Common Vulnerability Scoring System (CVSS)
I am one of the original authors of CVSS, and have been working on it since 2003. Please see FIRST.ORG for a full description of the current standard.

Currently, corporate IT management must identify and assess vulnerabilities for many disparate hardware and software platforms. They need to prioritize these vulnerabilities and remediate those that pose the greatest risk. But when there are so many to fix, with each being scored differently across vendors, how can IT managers convert this mountain of vulnerability data into actionable information? The Common Vulnerability Scoring System (CVSS) is an open framework that addresses this issue. It offers the following benefits:

CVSS is part of the Payment Card Industry Data Security Standard (PCI-DSS), NIST's SCAP Project, and has been formally adopted as an international standard for scoring vulnerabilities (ITU-T X.1521).

Security Patterns
Patterns are a beautiful way of organizing and formalizing proven solutions to reoccurring problems. They were developed by Christopher Alexander in the 1970’s. Alexander observed and documented the relationships that existed between things: objects, spaces, light, people, passages, and moods. From this work emerged architectural patterns and pattern languages. This methodology was later adapted to Object Oriented (OO) programming and then Information Security. A couple of important points about patterns (especially if you ever consider writing some):